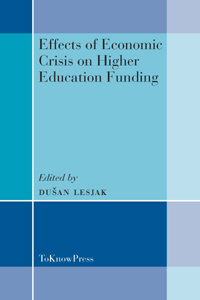 In the empirical analysis, countries are therefore clustered into two groups depending on severity of economic crisis and its impact on their economies and public finances. Empirical analysis has shown that during economic crisis, higher education sector has undergone cuts in public spending as well, but with a certain delay and mainly in economically more affected countries. Changes in public funding were examined by using indicators of public expenditure from public finance statistics, as well as by comparing expenditures per student and the share of expenditure allocated for student aid. We also studied changes in mechanisms and instruments of higher education funding during economic crisis. In many countries, governments introduced more innovative funding mechanisms that include elements of competition and performance. Universities themselves also responded to changed economic and social conditions by efforts to improve their own efficiency and effectiveness.

Our research thus documents how economic crisis had left a great mark on European higher education and also increased the gap between economically less and more affected countries.