Peripheral Metropolitan Areas in the European Union: The Case of Lublin 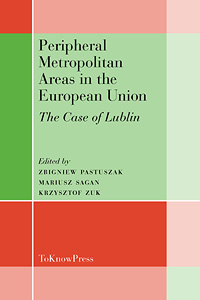 Cities and metropolitan areas have become the major centers of a new socio-economic order in the modern world. Their development determines the success of numerous national economies since it is large cities that integrate the key development processes, innovation and creativity, academic spirit and culture, networks and virtualization, participation and bottom-up civic initiatives.

A particular role in stimulating and diffusion of development is assigned to large municipalities in the peripheral areas, most frequently less economically developed. Exemplary are the regions located at the eastern border of the European Union, Eastern Poland included.

The major city and the only metropolitan area in Eastern Poland is Lublin. The city, being the region’s largest demographic center, its primary economic, academic, cultural and administration center, has a major role to play in this area of Europe. A prestigious weekly newsmagazine, The Economist, announces that it is Lublin which holds the potential to ‘lead’ the development of the entire Eastern Poland. Janusz Lewandowski, the European Commissioner for Financial Programming and the Budget, has compared Lublin to the Eastern German city of Dresden and Saxony Region, which have become the driving force as well as a development center for that part of Germany.