Towards the Actor Coordination Model 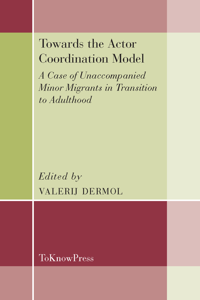 Europe is currently faced with a surge in migration from third countries, which is considered by some as a migration ‘crisis’. Differences in attitude and general political outlook brought to the surface by this surge are hard to reconcile. While it is obvious that the situation in the countries of origin of refugees is desperate, the legal system in most European countries admits third country nationals only in cases of individual or collective prosecution. All refugees, except the few admitted under the legal framework, are facing long periods of insecurity regarding their status of residence and having only limited access to both the educational system and the labour market. Among them, young refugees are most numerous by far, as, due to the current mostly illegal ways of getting to Europe, young healthy and dynamic males have the best chance of making it. These young people carry with them the hope of friends and family that they will be safe from the direct consequences of war and conflict, but also the hope that they will be able to get to and stay in Europe to support their families from there. The aim of the CiSoTRA project was to develop and apply innovative methodology to foster social inclusion of unaccompanied minor migrants in transition to early adulthood through holistic support networks, which would facilitate the transition from the youth support and education system to the adult education and employment system.